What are the important Cassandra metrics to monitor and how to monitor them.

What is cassandra and why use it?​

Cassandra is an open-source, distributed, wide-column NoSQL database management system written in Java. Cassandra was originally developed by Avinash Lakshmanan and Prashant Malik at Facebook and then released as open source, eventually becoming part of the Apache project.

Cassandra is a NoSQL database - NoSQL (also known as "not only SQL") databases do not require data to be stored in tabular format. They provide flexible schemas and scale easily with large amounts of data and high user loads.

Cassandra also offers some key advantages over other NoSQL databases:

For these reasons Cassandra is used by large organizations such as Apple, Netflix, Facebook and others.

How to monitor Cassandra performance?​

When using Cassandra in production it becomes crucial to quickly detect any issues or problems (including but not limited to read/write latency, errors and exceptions) that may arise and rectify them as soon as possible.

To achieve this, thorough monitoring of Cassandra is essential!

Cassandra exposes metrics via JMX (Java Management Extensions) and there are a few different ways in which you can access them including nodetool, Jconsole or a JMX integration. While nodetool and Jconsole are very useful tools and the right choice if you just want a quick view of what’s happening right now - a more comprehensive JMX integration is the way to go for detailed troubleshooting. Netdata uses the Prometheus JMX integration to collect Cassandra metrics.

What metrics to monitor?​

There are hundreds of possible metrics that can be collected from Cassandra - and it can get a bit overwhelming. So let’s try and keep things simple, by going through the most important metrics that will help you to monitor the performance of your Cassandra cluster.

Monitoring the throughput of a Cassandra cluster in terms of the read and write requests received is crucial to understand overall performance and activity levels. This information should also guide you when it comes to choosing the right compaction strategy - which may vary, depending on whether your workload is read-heavy or write-heavy.

If your data is modeled properly, Cassandra offers near linear scalability. 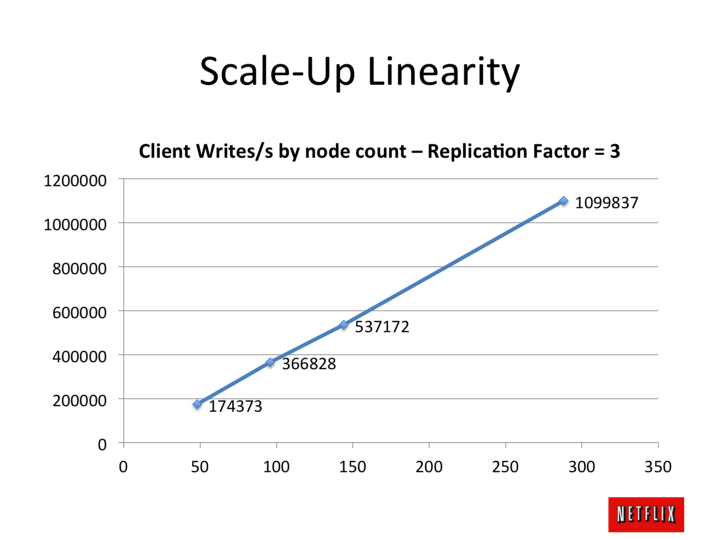 Latency often acts as the canary in the coal mine and monitoring latency gives you an early warning about upcoming performance bottlenecks or a shift in usage patterns. Latency can be impacted by disk access, network latency or replication configuration.

Latency is measured in a couple of different ways. Latency across reads and writes are measured as a histogram with percentile bins of 50th, 75th, 95th, 98th, 99th, 99.9th so you understand the latency distribution across time. Cassandra uses a histogram with an exponentially decaying reservoir which is representative (roughly) of the last 5 minutes of data. The total latency (summed across all requests) is also measured and presented in a different chart.

Consistently high latency or even occasional and infrequent spikes in latency could point to systemic issues with the cluster such as:

Cassandra provides built-in efficient caching functionality through the key cache and row cache. Key caching is enabled by default and holds the location of keys in memory per column family. It is recommended for most common scenarios and a high key cache utilization is desirable. If the key cache hit ratio is consistently < 80% or cache misses are consistently seen, consider increasing the key cache size.

Row cache, unlike the key cache, is not enabled by default and stores the entire contents of the row in memory and is intended for more specialized use-cases. For example, if you have a small subset of data that gets access frequently, and with each access you need almost all of the columns returned using a row cache would be a good fit. For these specialized use-cases row cache can bring about very significant gains in efficiency and performance.

Monitoring disk usage levels and patterns is key for Cassandra - as it is for other data stores. It is recommended to budget for free disk space at all times so that there is always available disk space for Cassandra to perform operations which temporarily use up additional disk space, such as compaction. How much free disk space should be maintained depends on the compaction strategy, but 30% is generally considered a reasonable default.

In Cassandra, writes are written to the commit log and to the active Memtable. Memtables are later flushed to disk, to a file called SSTable. Compaction is the background process by which Cassandra reconciles copies of data spread across different SSTables. Compaction is crucial for improving read performance and enables Cassandra to store fewer SSTables.

Picking the right compaction strategy based on the workload will ensure the best performance for both querying and for compaction itself.

The different compaction strategies that Cassandra uses are:

Cassandra, being based on Staged Event Driven Architecture (SEDA) separates different tasks in stages. Each stage has a queue and a thread pool. If these queues are filled up it could indicate potential performance issues.

Cassandra is a Java application and utilizes the JVM runtime. There are of course a multitude of JVM metrics available but monitoring the memory usage and the garbage collection stats are of particular importance for Cassandra.

ConcurrentMarkSweep or CMS (old-generation) garbage collection also temporarily stops application threads, but it does so intermittently. If CMS latency is consistently high it could mean your cluster is running out of memory and more nodes may need to be added to the cluster.

It is crucial to monitor Cassandra’s own error and exception metrics. Possibly the most important one is the rate of unavailable exceptions, which could indicate that there are one or more nodes which have gone down.

All of the crucial Cassandra performance monitoring metrics mentioned above are monitored at high fidelity by Netdata. To find out more about how Netdata monitors Cassandra and how you can troubleshoot your Cassandra cluster, don’t forget to read the next part of this monitoring guide. We’d love to hear from you – if you have any questions, complaints or feedback please reach out to us on Discord or Github.

Note: This post is the first part of a Cassandra monitoring series. Be sure to read our second entry here.