Database bloat is disk space that was used by a table or index and is available for reuse by the database but has not been reclaimed. Bloat is created when deleting or updating tables and indexes. Here's how to deal with it!

What is Database bloat?​

Database bloat is disk space that was used by a table or index and is available for reuse by the database but has not been reclaimed. Bloat is created when deleting or updating tables and indexes.

Because Database heap tables use the PostgreSQL Multiversion Concurrency Control (MVCC) storage implementation, a deleted or updated row is logically deleted from the database, but a non-visible image of the row remains in the table. These deleted rows, also called expired rows, are tracked in a free space map. Running VACUUM marks the expired rows as free space that is available for reuse by subsequent inserts.

It is normal for tables that have frequent updates to have a small or moderate amount of expired rows and free space that will be reused as new data is added. But when the table is allowed to grow so large that active data occupies just a small fraction of the space, the table has become significantly bloated. Bloated tables require more disk storage and additional I/O that can slow down query execution.

Database bloat occurs in heap tables, append-optimized tables, indexes, and system catalogs and affects database performance and disk usage. You can detect database bloat and remove it from the database.

You can use a query like the one below to show the dead tuples (or table bloat) for every single table / index in your Database.

With the right sorting applied to the query, you can narrow down the top tables / indexes that are experiencing a bloat.

The results include only tables with moderate or significant bloat. Moderate bloat is reported when the ratio of actual to expected pages is greater than four and less than ten. Significant bloat is reported when the ratio is greater than ten. The gp_toolkit.gp_bloat_expected_pages view lists the actual number of used pages and expected number of used pages for each database object. 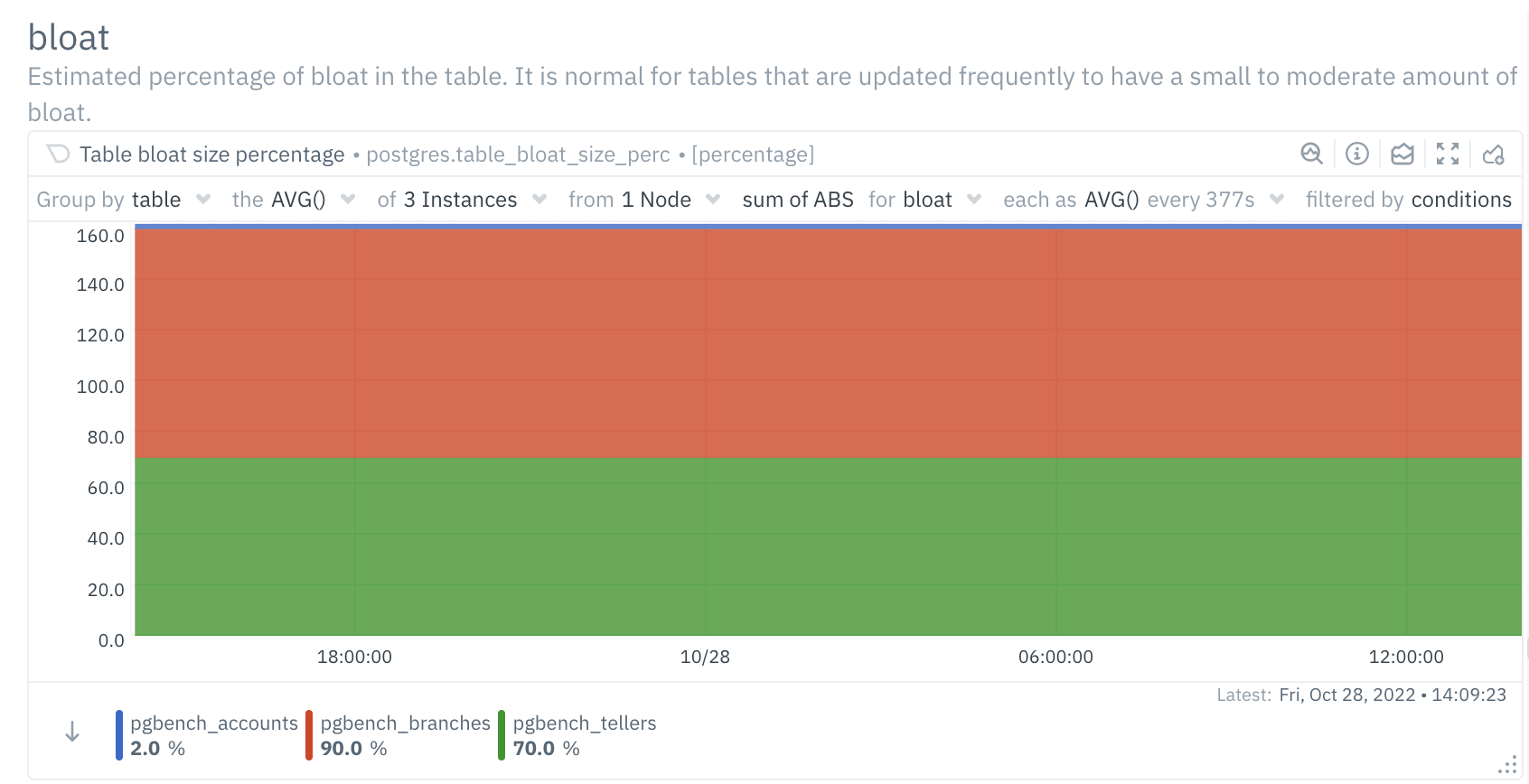 The VACUUM command adds expired rows to the free space map so that the space can be reused. When VACUUM is run regularly on a table that is frequently updated, the space occupied by the expired rows can be promptly reused, preventing the table file from growing larger. It is also important to run VACUUM before the free space map is filled. For heavily updated tables, you may need to run VACUUM at least once a day to prevent the table from becoming bloated.

When a table accumulates significant bloat, running the VACUUM command is insufficient. For small tables, running VACUUM FULL <table_name> can reclaim space used by rows that overflowed the free space map and reduce the size of the table file. However, a VACUUM FULL statement is an expensive operation that requires an ACCESS EXCLUSIVE lock and may take an exceptionally long and unpredictable amount of time to finish for large tables. You should run VACUUM FULL on tables during a time when users and applications do not require access to the tables being vacuumed, such as during a time of low activity, or during a maintenance window.

Warning: When a table is significantly bloated, it is better to run VACUUM before running ANALYZE. Analyzing a severely bloated table can generate poor statistics if the sample contains empty pages, so it is good practice to vacuum a bloated table before analyzing it.

The VACUUM command only recovers space from tables. To recover the space from indexes, recreate them using the REINDEX command.

To rebuild all indexes on a table run REINDEX table_name;. To rebuild a particular index, run REINDEX index_name;. REINDEX sets the reltuples and relpages to 0 (zero) for the index, To update those statistics, run ANALYZE on the table after reindexing.

Database system catalog tables are heap tables and can become bloated over time. As database objects are created, altered, or dropped, expired rows are left in the system catalogs.

Bloat in the system catalogs increases the time required to scan the tables, for example, when creating explain plans. System catalogs are scanned frequently and if they become bloated, overall system performance is degraded.

It is recommended to run VACUUM on system catalog tables nightly and at least weekly. At the same time, running REINDEX SYSTEM removes bloat from the indexes. Alternatively, you can reindex system tables using the reindexdb utility with the -s (--system) option. After removing catalog bloat, run ANALYZE to update catalog table statistics.

We’d love to hear from you – if you have any questions, complaints or feedback please reach out to us on Discord or Github.